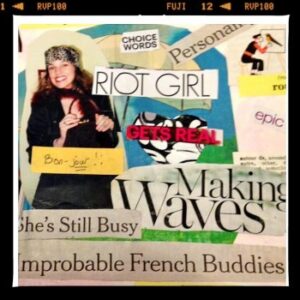 When I graduated from college, the last thing I wanted was to live in Atlanta, GA. I had spent my whole life in the peach state.

With my college degree from the University of Georgia in hand, I jumped on a plane to interview for design jobs in New York City without luck. Disappointed, I returned home and took a job with a French telecommunications company. Not a likely choice for an artist, but I was twenty-one, fresh out of college and wanted out of my parents’ house. I was totally qualified. I had a college degree … and my dad worked there.

My new job had insurance, flight privileges, paid vacation and a steady paycheck (things an artist rarely sees). For me, this job was an opportunity to travel to places far away. After a few years of proving myself, I was transferred to the project management team in Atlanta led by a French dude named Laurent Garnier. The Georgia locals had a wonderful redneck translation for his name, we called him Larry Gardner. We even had a “Larry Gardner” plaque made for his door. I loved working for Laurent. He was a great boss and mentor. He taught me valuable business skills and I taught him English slang and not to wear tight pants to work in the south. Hanging out with a bunch of Frenchies was almost as interesting as getting out of Georgia, but not quite. I began lobbying to be sent anywhere outside the state border and especially to France. At first, my efforts resulted in trips to Los Angeles, Paris and London for training or other special projects. Eventually it paid off and I won a position in our Nice, France office.

You know that feeling when you work hard to get something and then you get it and you aren’t sure how you feel about it. That happened. Fear and anxiety entered the equation as I pondered moving abroad not knowing a soul. When I consulted my parents, my mom said, “You can’t let fear keep you from living your life.” My father said, “French toilet paper sucks and they won’t have light bulbs in your apartment when you first move in, take a lamp.” My parents are famous for awesome advice. Thankfully, what scared me most was not going.

Everything happened fast. I was scheduled to start my new role less than 30 days of signing the papers. Quickly, I took a few weeks of an immersion French class. I learned to count, order a sandwich and politely greet people. I bought a book called “Learning French in 10 minutes a day” and the “Eyewitness guide to the Cote d’ Azur”. Hardly prepared for my new life, I boarded a plane just a few months after my 27th birthday, and moved from Atlanta, Ga to Nice, France. 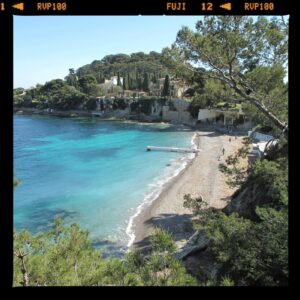 My first residence was a corporate apartment provided by my employer just a few blocks from the ocean in Juan les Pines, a high-end luxury resort area on the Riviera.

Shortly after unpacking my things, I went for a run. The weather was perfect. The coast was a breathtaking mix or rocky cliffs and crystal clear blue water that gave the region its name, La Cote d’ Azur. That first jog was a visual party that only a southern belle on her first adventure alone abroad could experience. It felt like winning the lottery.

Work and life were both exciting and exhausting those first few weeks. Everything required vigilance. If I wanted to eat, drink, put gas in my car or converse with other human beings, I had to figure out what to say beforehand and practice. I took yellow post-it notes in my purse of what to say in different situations. Surprisingly, this crude system of communicating worked for me more times than you would think. This part of France is not like Paris, where many people speak English.  I needed to learn French in a hurry.  The locals were stuck having to try to understand my broken French with a southern accent. Not having the fall back of English is a gift if you really want to learn a new language. 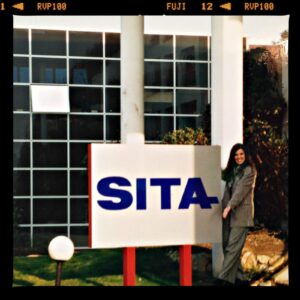 In addition to language barrier, I was also having to learn another new skill; driving a manual car. I am famous for hating driving in general. Please keep in mind that this was prior to cell phones for the masses, Google or GPS. I got lost often. Fellow drivers spoke to me daily and not in a good way. I would always just wave and smile. Somehow, I managed and always found where I was going… eventually.

One night my colleagues invited me to dinner in the old town district of Nice. I was so tired that I almost didn’t go. I had spent the entire day in the French Prefecture getting my work visa. Eight hours of standing in line after line. But I sucked it up, jumped in my clothes and headed out to have some fun. My co-workers were nice to engage with me in English. However, much of the conversation was in French. I was lost and only catching a word here or there. Suddenly, my ears perked up as they were speaking to me, “Laura, you need to be careful when you park your car at night in Juan les Pines. Your car has rental plates and you might be a target for theft. Carjacking is very common there for tourist.” Merde. Oh great. On that note, I thanked everyone and excused myself so I could get home before it got too late. 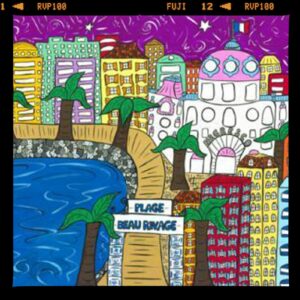 The drive from Nice to Juan les Pines should have been only 15 minutes, but I got lost and it took me about an hour. It was 9:30 pm and dark when I arrived. I drove into the gated parking lot of my corporate apartment and there were no spaces available. Merde. The streets around my building were full of parked cars, but no people. I found a spot. As I started to parallel park in my new stick shift totally awesome French car, out of nowhere, I noticed a teenager in my rearview mirror. He was about 14 years old and wearing a tracksuit. I just remember thinking; does he look like a thief? No. Then he started to walk toward my passenger door. OMG! I hadn’t locked the doors. I scurried frantically to lock them. The car jerked and stalled because, in the excitement, I had taken my foot off the clutch. The 14 year old opened the passenger door and got in the car.

The following events happened in a matter of seconds. For me, everything was moving in slow motion. The 14 year old reached for my purse on the floorboard. I grabbed it too and managed to get a hold of one strap and held on tight. My work visa was in my purse and so was my passport. I started yelling at him. I didn’t recognize the sound of my voice. The pitch was disturbing and unfamiliar. He pulled and I pulled. It was a loud and very determined tug of war.

I quickly assessed that he had no gun or knife that I could see and he seemed to be almost as scared of me as I was of him. There was no way I was going to let him take my bag. I started cussing him out in English, pulp fiction style, to get out of my car and that I didn’t have any money. I am sure he had no idea what I was saying. His eyes were open very wide and he started hitting me on the arm and face. Before I could think, I punched him back as hard as I could in his face with my left hand. I hit him so hard that I thought I had broken my hand. At the same time of the struggle, my car was slowly rolling backward (I forgot to put the break on) and eventually hit the car behind me which set off its alarm. In addition to the car alarm, I could hear two men shouting in French. Suddenly, the strap of my bag that the 14 year old was holding snapped in two and he jumped out of the car and ran into the night. Just like that, he was gone. I still had my purse minus a strap and I am pretty sure I gave that kid a shiner.

I sat in my car trying to catch my breath. My heart was pounding in my chest. Adrenaline is real. It had electrified my voice and fueled that involuntary sucker punch. Adrenaline – Respect!

I put on the emergency break to stabilize my car when the two French men came to check on me. “Ca va?” they said. “Oui. Ca va.” I said. “Vous êtes Anglaise? “they asked. “ No, je suis Américaine.” I said. Then quite unexpectedly, these two adorable French men in their 70s started speaking in perfect English. “You are very brave. Do you want us to call the police?” they asked. I said no that I was fine and just wanted to go to my apartment. They walked with me all the way to my door and gave me their card if I needed anything. They told me to always park in the gated lots and to get home early. One of them said, “I don’t think he’ll be back” and he winked at me. I guess they heard the scuffle.

I locked my apartment door and sat on my bed as I collected myself. I was alone. I knew no one here. Amazingly, I was only scared a few minutes. I wanted to talk to my parents, but didn’t want to call their work and alarm them. I ended up calling people I had worked with in Atlanta. We laughed about my victorious ending, but there was nothing funny about this incident when it happened. Only a few minutes had passed and I could already see how lucky I had been. It ended well not because I’m a badass (which I totally am), it ended well because the kid wasn’t armed and he wasn’t a professional. He just needed money and I wish I would have had some to give him. If this would have happened in the U.S., I’d be dead or in the hospital from a bullet. This sobering close call did not make me want to go home. It just made me feel lucky.

I told the story at work and my colleagues were relieved that nothing bad happened and laughed that I had sent the thief running. My favorite French buddy kept telling everyone, “Hey! Don’t touch her bags!” My boss immediately moved me to a less glamorous but equally beautiful family friendly neighborhood near the office the next day. 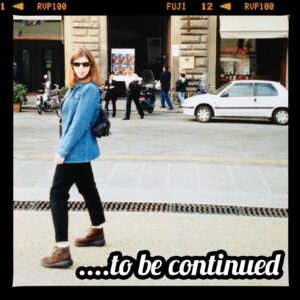 Short Stories From A Long Friendship